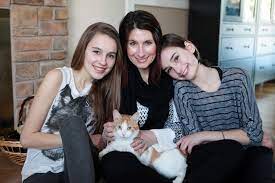 Katherine Dines has survived and persevered through her diagnosis of Long-QT, a hereditary rhythmic heart condition that causes a chaotic, irregular heartbeat. The condition’s name stems from the fact that the length between the Q and T waves on an electrocardiogram are extended in patients with the disorder.  This is a subtle signal that the heart is prone to falling out of rhythm, with sometimes devasatating consequences, even death.

Her grandmother died shortly after birthing her first child. She was in her early twenties and no cause of death was ever determined by doctors.

“And then, my mother died when she was twenty one years old,” says Katherine. “I was four months old.”

When her mom’s autopsy reports arrived, they activated the voice that lived in Katherine’s head. “For weeks I leafed through the piles of papers detailing my mother’s health and medical history,” she said. “I was desperate to find something, anything that would point me to why the women in my family had deteriorated so unexpectedly. So suddenly.”

Is this a coincidence? Is this genetic? Am I going to suffer the same fate? She asked herself.

Reading through hundreds of scribbled notes and dense documents, Katherine deciphered that her mother had frequent fainting spells during her pregnancy. Doctors diagnosed it as epilepsy. “Though I only knew her for four months, it seemed that she had managed the seizures well, taking medications to treat it based on her prescription list,” Katherine said. “When asking around my family, no one had been aware of her condition. They all just knew her as the beautiful, caring wife who tragically passed without a trace.”

Though she hoped that the case file would lead to answers, the google deep dives and unending list of hardly comprehensible PubMed publications she was drowning in left her with more questions than she had started with.

“Some nights I would just stare at the empty search box on my glowing computer screen,” she said.

Eventually, Katherine got an appointment with a cardiac specialist at the Children’s Hospital of Eastern Ontario (CHEO). That visit, she was told her fears were unfounded. There was nothing wrong with Katherine. Six years later, she would find that she had much to worry about.

“I was six months pregnant with my second daughter when a new cardiologist at CHEO called me,” she said. “He told me to come in and get a genetic test because a lot of his patients with similar symptoms were finally being diagnosed because of it.”

Katherine only learned of Long-QT syndrome (LQTS) after a genetic confirmation of the inherited gene sequence she possessed.

“I’d seen it here and there as a type of heart rhythm disorder, but I always thought it was so rare. Plus, there wasn’t really any data about the symptoms,” she said. “When I got the test back saying it was positive, it was like I struck gold.”

This was what my mom died of. This is what my grandmother died of. Finally, Katherine had closure.

Katherine Dines didn’t just nearly lose her own life to Long-QT, both of her daughters’ lives were narrowly saved as well. Her daughters, Sydney and Grace were both confirmed to have Long-QT syndrome by genetic tests.

“I’ve suffered so much, but I’m also so thankful to the hospitals and doctors and researchers that helped us,” she says. “Luckily the three of us have been relatively asymptomatic. I mean we take our medications and visit our cardiologists, but aside from that it doesn’t inconvenience us in any way.”

Katherine became a leading force in the Ottawa patient advocacy community because she wants everyone with a testable, discoverable genetic disorder to get the kind of closure she received.

In 2014, the Children's Hospital of Eastern Ontario filed suit against United States company, Transgenomic, over their five genetic patents on Long-QT Syndrome genetic variants used for testing. The patents limited doctors’ ability to relay test results to patients and doubled the cost of testing for hospitals outside of Canada. The case followed an argument similar to the 2013 Myriad Genetics Case and in 2016, CHEO won the rights to test for LQTS. Transgenomic’s patents were no longer recognized in Canada and its territories.

Patient advocates, like Katherine, were sighted as a main reason why Transgenomic was willing to settle the case.