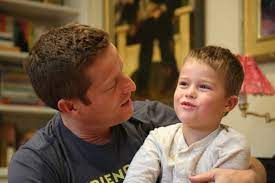 Behind the bags under eyes, is a parent fighting for more answers about his son. “We just wanted to know what was going on,” he says. Mike Graglia and his wife, Ashley, have two beautiful children. When their eldest son, Tony, began showing signs of delayed development and epileptic episodes at age 3, they knew something was wrong. Several specialists diagnosed Tony with epilepsy and severe autism. However in 2018, a genetic test revealed a disease far more rare.

Tony was one of about 500 children with SynGAP. Discovered only 20 years ago, the disease results from a mutation in the SYNGAP1 gene, a gene that codes for a critical neurological protein called SynGAP.  In most cases, the mutation is not inherited from the mother or father, but rather arises from a DNA copying error during cell division in sperm, egg, or embryos (most often in the process of making sperm). The lack of protein causes symptoms such as epilepsy, autism, intellectual disability and disordered sleep patterns. SynGAP patients run on a spectrum of disease severity, are disabled for life and often required to take a range of medications to manage their symptoms.

“Getting that test back was like a weight being lifted off of us” says Mike. “Yes, our son was still sick but we had a label now. We had a target. We had a community that could help us through this.”

“If it wasn’t for that test, I don’t know where we would be,” Mike sighs. “I can’t imagine the pain of not being able to understand what is happening to your loved one and then not be able to help them in any way.”

The gene for SYNGAP was subject of a patent in the United States, Canada, Europe, Japan,

Since Tony's diagnosis, Mike and his wife Ashley have founded the SYNGAP Research Fund, a global group of families committed to the research and development of treatments, therapies and support groups for SynGap families worldwide.

“Being a SynGAP parent is very hard,” admits Mike. “But we were in a unique position to put force and funding behind the hope for discoveries and developments that can help our son during his lifetime. That’s what we did.”

“We are advocates but we are also pushing the research movement to keep pace with the onset and severity of this disease.”