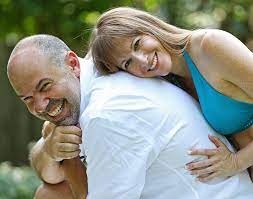 “This wasn’t going away”

Dave Dubin always thought he may have colon cancer. His dad and grandfather had both had it in their lifetimes. In 1997, the cancer struck early. Dave was 29, but he knew the routine. Surgery, chemotherapy, colonoscopies—he was ready. However, he wasn’t ready to do it all over again, a decade after his first fight with cancer.

“We knew he had a family history, but genetic testing wasn’t routinely available yet,” explains his wife, Robin. “It wasn’t until 2007, when he received his second colon cancer diagnosis that he got a blood test.”

Dave had a genetic mutation that made him more likely to develop cancer at a young age. He was diagnosed with Lynch Syndrome. Lynch Syndrome is a hereditary predisposition to colorectal cancer that affects 1 in 300 Americans and increases their risks of developing other types of cancer as well. Dave would discover soon after his Lynch diagnosis, that he had another cancer in his kidneys.

“The first colon cancer was a rite of passage,” says Dave. “The second cancer started setting off alarms, and made me realize this wasn’t going away. I  started thinking about my kids and how they may be impacted.”

Despite the frequency of the mutation, 95% of Lynch carriers remain unaware of their condition. Many patients diagnosed with colon cancer at an early age will undergo chemotherapy and surgery without ever being tested and receiving the treatment they need to prevent the cancer from coming back.

“Most people get tested for Lynch syndrome after a cancer diagnosis and their family members will then get tested,” says Robin. “Because Lynch cancers are so early onset, we need to start deploying testing earlier, before they get cancer.”

In an ideal world, Robin and Dave see everyone and anyone having access to a genetic counselor or testing as part of  their primary health care.

“That’s not happening for the most part,” explains Robin. “And, the increasing costs of these tests and proposals to limit access to them are only going to make things worse.”

Frustrated with the lack of patient resources and awareness around Lynch syndrome, Robin and Dave founded AliveAndKickn in 2012. The group advocates for Lynch syndrome patients through research and legislation. Currently, Robin represents the hereditary disease and disorder patient communities as the chief negotiator in gene patent and licensing negotiations between government leaders, corporate industry and private interest organizations.

“Patents on genes have the potential to keep even more folks in the dark about Lynch syndrome, as well as a number of other genetic disorders,” says Robin. “Our son is Lynch positive. His children may be Lynch positive. What does the future hold for them? They should be empowered to know about their genetic makeup and get treatment in order to live their lives.”

In order to promote data sharing and research transparency, the Dubins have built a patient registry to collect medical and genomic data from Lynch patients. Researchers can then use this registry to expand the dataset included in their studies and connect with the patient community they serve.

Find out more about AliveAndKickn here.